Double Elephant Print Workshop has recently completed a third residency at Franklyn House Hospital in Exeter. This time we worked on images that focussed on food and healthy eating – the designs were later printed onto foamex and displayed in the dining area. The designs started with a basic drawing that illustrated a poem or […]

New work in response to art making alongside dementia patients

At last today a resumption of my work in response to the printmaking sessions run at Franklyn Hospital over 12 months ago. I hope to return to Franklyn soon as I find the art making alongside dementia sufferers so rewarding – and so beneficial for the participants themselves.  I want to find a way to […] 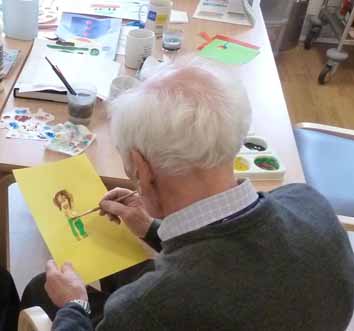 At last the work we made in an Arts Council funded residency in 2013 returns to Franklyn House : An exhibition of paintings and prints made by patients who were in Franklyn Hospital with dementia and mental illness. Here is a catalogue essay written by Gill Nicol to give a little background to the exhibition […]

Coming to the Walkway Gallery at Exeter Phoenix an abridged version of the Franklyn Hospital Exhibition. The show opens on Tuesday 15th October and runs until 16th November.

The Derriford exhibition of work produced during the Franklyn Residency has been extended until 17th September and it won’t be going to Derriford Hospital until next year – bit of a mix up there. Here is everything else : Royal Devon & Exeter Hospital, Exeter.  2nd July – 17th September Redearth Gallery, Bickleigh. 9th – […]